PROGRESSIVE RETINAL ATROPHY: THE KNOWN AND THE UNKNOWN OF A GROUP OF EYE DISORDERS CHARACTERISED BY A VARIETY OF DEGENERATIVE CONDITIONS

A few months ago Inqaba Biotec™ was introduced to Bizzy; the seal point Siamese cat that went blind at the age of 2. Bizzy lives an inspiring life and a cat that we associate with courage and determination. When life throws you a genetic curveball you have two choices in life, to give up or to rise up. Disabled animals have a tenaciousness that surprise us and insight in us faith, wonder and compassion. To raise awareness of Progressive Retinal Atrophy (PRA) in the South African community, we decided to test Bizzy for both PRA’s that Inqaba Biotec™ offers for felines and use this as an opportunity to educate breeders, vets, owners and the public alike. 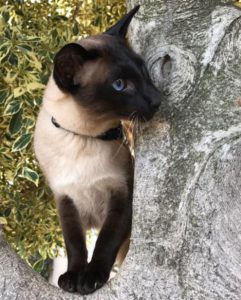 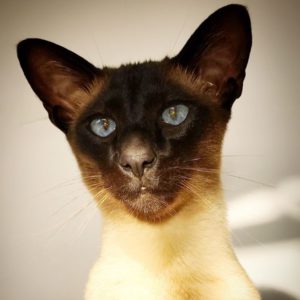 Progressive retinal atrophy is a collection of eye disorders that lead to blindness and have been well characterized in canines and felines. PRA’s have been studied since the late 70’s in domestic animals due to their practicality as model organisms for human PRA-like diseases. To date, over 160 candidate genes have been identified as associated with PRA since 1993, with over 20 PRA’s being described in canines and at least 5 PRA’s being described in felines. Although various PRA conditions have been described, not all of the causal mutations have been identified (see Table 1 below for PRA diseases tested at Inqaba Biotec™).

Rod cone dysplasia (PRA_Rdy) is an early onset disease that was first identified in an Abyssinian cat in 1985. PRA-Rdy is caused by a single base deletion in exon 4 of the feline CRX gene, which was identified in 2010. Symptoms include dilated and lethargic pupils present at 2 weeks of age, starting with progressive nystagmus presenting 4 to 6 weeks followed by observable changes to the fundus at 12 weeks. PRA-Rdy is an autosomal dominant disorder that requires only one copy of the mutant allele to cause the disease.

As Bizzy went blind at 2 years, this is unlikely that Bizzy had PRA_Rdy, as early onset PRA presents in kittens younger than 3 months. However this disease has been predominantly identified in Abyssinians and Siamese. We decided to test PRA_Rdy because it is possible that a certain mutation could react differently in different breeds.

Retinal degeneration (PRA-rdAc) is a late onset photoreceptor degenerative disease that was first identified in Abyssinian cats in 1983. This disease is caused by a nucleotide modification (T>G) in intron 50 within the feline CEP290 gene, which was identified in 2007. PRA-rdAc is an autosomal recessive disorder that requires two copies of the mutant allele to cause the disease. This disease starts with slight colour changes of the fundus, followed by vascular attenuation, depigmentation and eventual blindness between the ages 3 and 5.

Bizzy was clear for PRA-rdAc. This was surprising as 33% Siamese tested for PRA-rdAc are positive for this mutation.

Table 1: A list of PRA diseases affecting cats (blue) and dogs (green), the breeds affected, the genes associated, and the years they were characterized.

*There are many other PRA varieties in dogs and genes associated. This list is not exhaustive. For more information, please contact Inqaba Biotec™. Inqaba Biotec™ develops genetic health tests on a demand basis.

PRA is a collection of eye disorders that are caused by a myriad of gene mutations. Although Bizzy’s PRA is not caused by CEP290/CRX, we cannot exclude the possibility that his particular PRA was caused by another gene that is yet to be identified and/or characterized. It is thanks to improved technologies and research initiatives like 99Lives, the cat genome sequencing initiative run by Dr Lyons, that we can identify these mutations and provide breeders with tests for these disorders.

Testing for these diseases helps the breeders ascertain which queen and tom to use in a breeding strategy to guarantee beautiful kittens and prevent affected kittens from being born. Inqaba Biotec™ does not support the removing of affected individuals of autosomal recessive diseases from the gene pool. Canines have been bred by humans for over 30,000 years and felines for 10,000 years; this has resulted in a restricted genetic diversity giving rise to hundreds of breeds. To remove genetic diversity from a gene pool often results in the emergence of other recessive diseases. It is our recommendation that in order to breed responsibly, breeders should test their stock and follow the following guidelines: breed clear to clear/carrier/affected.